Pro-Russian officials walk around their homes during the referendum in the occupied territories. Somewhere, gunmen are forcing people to vote 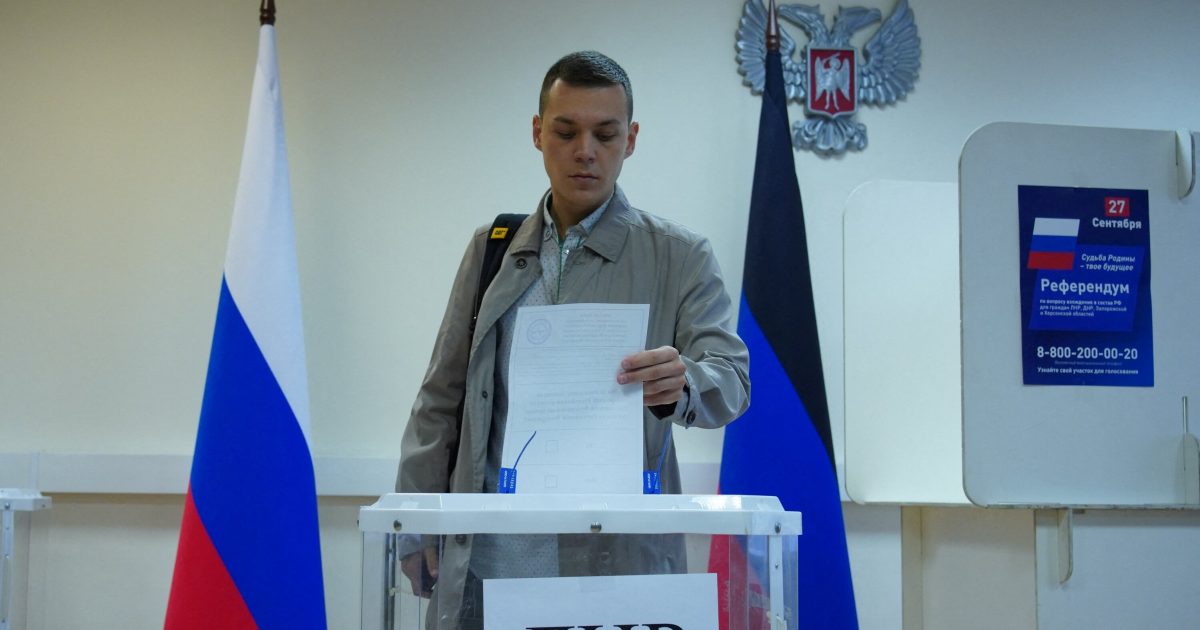 According to pictures in Russian media, pro-Russian officials are going door to door with portable ballot boxes to get people to vote, AFP reported.

“today (Friday – Editor’s note) It would be better for the Kherson people not to open the doors, Yury Sobolevsky, deputy head of the Kherson Regional Council of Ukraine, said on the Telegram platform.

People have been forced to fill out “pieces of paper” without privacy in kitchens and apartment backyards, while cities have been locked down to prevent them from leaving and avoid voting, the head of Ukraine’s Luhansk region administration, Serhiy Hagdayi, told Reuters. mentioned.

Hajjaj said that in the city of Starobilsk, pro-Russian authorities prevented residents from leaving the city until Tuesday and sent armed groups to search homes and force people to participate in the referendum.

Residents of the mentioned parts of Ukraine who are now in Russia can also come to cast their votes, however, according to Russian Internet sources, there is confusion about where they can cast their votes. The referendum is scheduled to last five days. In the first four days, election commission members will visit the homes of local residents, independent server Medusa and the BBC’s Russian-language website reported.

According to them, the polling stations will also open on the last day. The occupation authorities interpret the decision as a concern for the safety of the residents, and many of them will be forced to vote in the settlements located near the front line.

In the Kherson and Zaporozhye regions, answers are required to three questions – whether the voter is in favor of secession from Ukraine, the creation of an independent state and accession to the Russian Federation.

On Friday, the Russian TASS news agency reported that less than a thousand observers are participating in the referendum in the Donetsk People’s Republic, and there are no independent international observers among them.

The Organization for Security and Cooperation in Europe (OSCE), which routinely monitors the elections, said the results would not be legally valid because they were in violation of Ukrainian and international law, were held in unsafe areas and were not involved. its independent observers.

again about important. Today, there is no legal procedure called a “referendum” in the occupied territories. there is only –

1. Trailer for z recruitment.
2. The territory of Ukraine that needs immediate release.

Kyiv and its Western allies have described the referendums as a fraud. Their representatives said that they do not recognize the results, they consider it just a step by Moscow towards the illegal annexation of other Ukrainian lands. Russia says the referendums are an opportunity for residents of the region to express their views.

Official results are widely expected to support joining Russia. According to CNN, Hajjaj said on Friday that Russia would calculate what outcome would be favorable to it. “The opinion of the residents is meaningless,” he said.

Reinforcements from the Crimea

Meanwhile, the Ukrainian agency Unian wrote that pro-Russian authorities had brought a mob from Crimea, which Moscow annexed in 2014, to occupied Melitopol in the Zaporozhye region to film propaganda clips and allegedly support residents for the referendum on accession. Russia.

She referred to the city’s exiled mayor, Ivan Fedorov, who said the occupiers days before filmed a report in which people in the streets expressed support for Russia – but spoke with an accent and were said not to be from Melitopol. .

In addition, according to Fedorov, there are initial reports that residents of Melitopol do not open the doors of officials visiting apartments and do not respond to their calls. “We can confirm that this referendum is fraudulent,” Fedorov said.

Putin has been playing tricks since the beginning, and the resistance of the Russians will now grow even stronger. Commentator says fathers will die from their families

Radio Free Europe/Radio Liberty (RFE/RL) wrote on its website that the Kremlin has implemented a number of measures in the Ukrainian territory under its control that raise deep doubts about the possible legality of the vote.

Moscow has also seized the personal and biometric data of hundreds of thousands of Ukrainians in its so-called “liquidation camps” it set up after the invasion, which experts say opens the door to poll tampering.

RFE/RL noted that Russia has little history of free and fair elections, on the contrary, ballot papers are routinely rigged and voters intimidated.

#forcing #gunmen #homes #occupied #Officials #people #proRussian #referendum #territories #vote #Walk
Previous Post
Czech Post received 4.5 billion from the state for basic services. Approved by the European Commission
Next Post
Putin does not need to scare us. We can do it ourselves