Police “lifted” posters appealing to witnesses to war crimes in Ukraine. He wants to prosecute the perpetrators 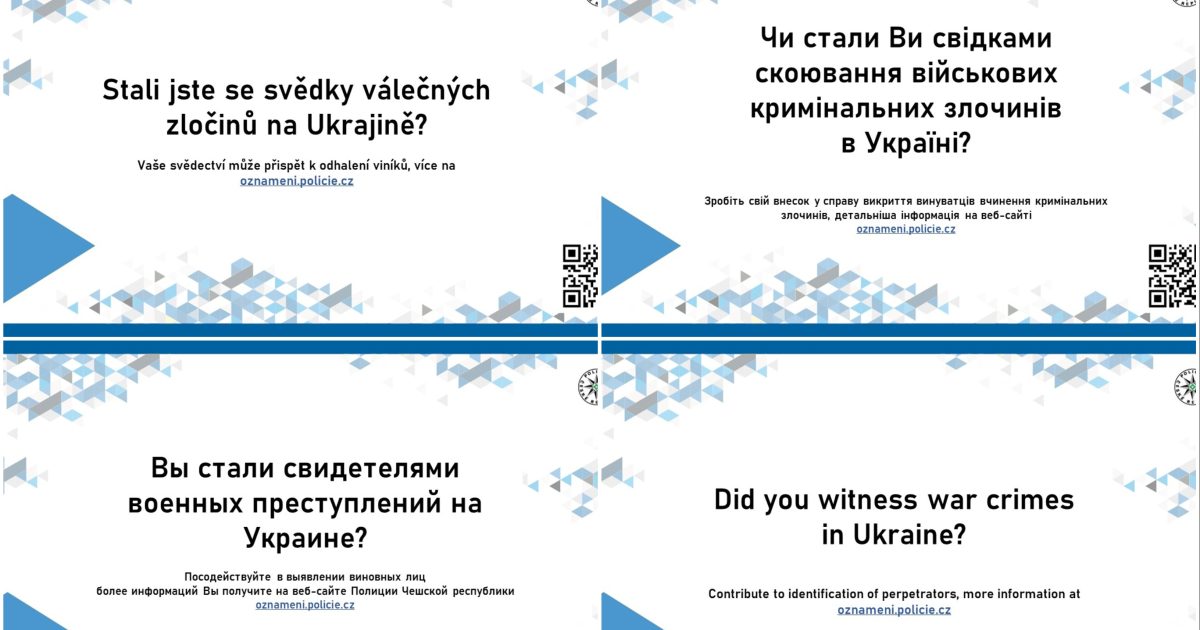 “If you have information about war crimes in connection with the war conflict in Ukraine, your information and knowledge can be crucial to their elucidation and prosecution,” the Czech Republic Police Campaign and National Headquarters website states against organized organizations. a crime.

It actually began in May, when the Central Bureau began investigating war crimes. By distributing posters, the police want to reach more people who can be witnesses or have the proceedings documented. The posters, the website, and the questionnaire they refer to are available in four languages: Czech, Ukrainian, English and Russian.

“Information that can be used as evidence in criminal proceedings against specific suspects may be available, among other things, to refugees from Ukraine who are currently on Czech territory. Their potential testimonies or audio-visual materials will fundamentally contribute to the correct documentation of certain crimes.” message Head office spokesman Jaroslav Ibhig.

At the same time, the police warn people fleeing the war in Ukraine on the website that it is not their duty to fill out the questionnaire. Whether they answer the questions cannot affect the legality of their stay in the Czech Republic or the outcome of any asylum procedures. Answering questions is not obligatory for anyone and cannot be.

What is a war crime?

The police refer to Chapter 13 of the Criminal Code on the War Crimes Reporting website. According to it, the conduct of one of the parties to the conflict in violation of the rules for conducting war in accordance with international law can be considered a war crime.

These include, in particular, attacks on civilians, torture, sexual violence, looting, but also the conduct of combat operations in built-up areas, such as the large-scale bombing of cities or the use of prohibited means of warfare, that is, chemical or biological. arms.

The Czech Republic is obligated to prosecute the perpetrators of war crimes under what is called universal jurisdiction. Decides that the relationship of the victim, offender, or act to the Czech Republic is not conclusive, but that the police must investigate war crimes at the national and international levels. It must cooperate with relevant institutions in the European Union, such as Eurojust and Europol.