In her speech, von der Leyen said that the share of Russian gas supplies to the European Union fell to nine percent 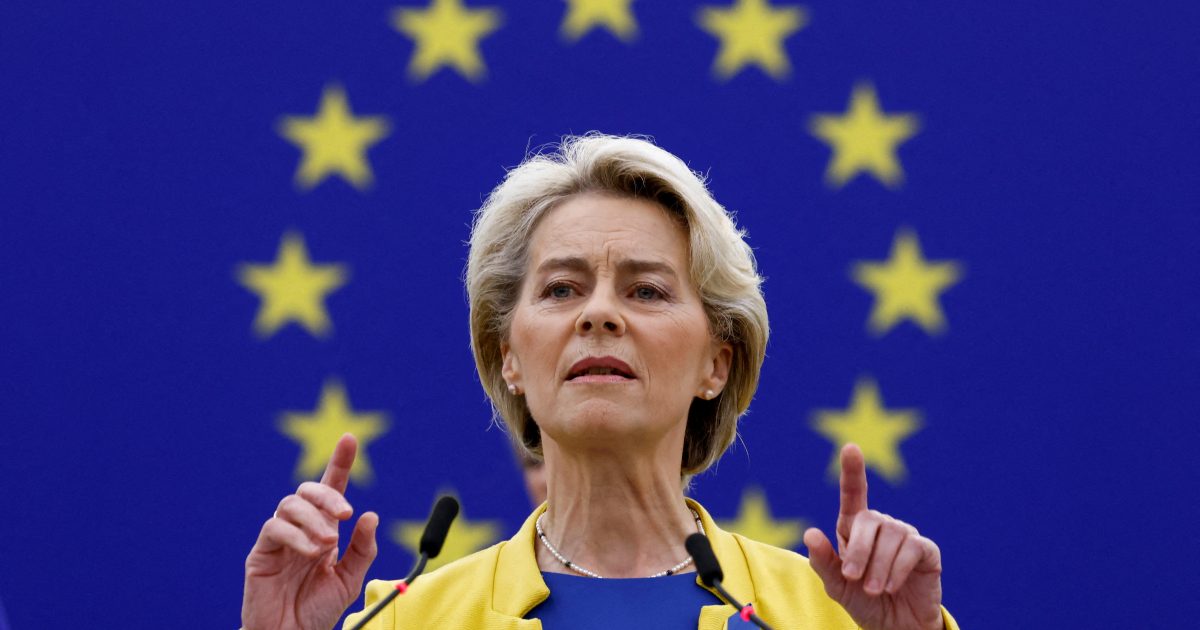 European Commission President von der Leyen, accompanied by Ukrainian First Lady Olena Zelenska, entered the European Parliament headquarters in Strasbourg by Commission President Roberta Mitsula. The State of the Union address itself was preceded by a photo session, mainly prepared by the committee members. Olena Zelenska is greeted with the colors blue and yellow, which are the colors of the Ukrainian flag.

“Today, courage has a name, and this is Ukraine,” von der Leyen said at first. She spoke of the inexhaustible courage of the Ukrainians to fight against Russia. She referred to the contributions made by the European Union and highlighted that, compared to previous crises that Europe has gone through, it is now reacting quickly and, above all, uniformly.

Von der Leyen spoke about the actions taken by member states against Russia. She emphasized that the sanctions are bearing fruit. According to her, this is manifested, for example, in the fact that the Russian financial sector is in “out-of-body trading”, and car production in Russia has fallen by three quarters, or that the Russian army has to take chips from dishwashers and refrigerators to tanks. At the same time, she stated that she will travel with Zelenska to Kyiv on Wednesday, where she will meet with the Ukrainian president.

Another part of the letter related to the measures that the commission will propose to solve the energy crisis. According to von der Leyen, the share of Russian gas supplies to the European Union decreased from 40 to 9 percent. She explained that the European Union countries significantly exceeded the plans by filling the tanks by 84 percent.

But she warned that this would not be enough, and thus millions of Europeans would need help. The authority submitted its proposal, “Therefore, we suggest setting an upper limit for the income of companies producing electricity at low costs.” “Thanks to our proposal, member states will receive more than 140 billion euros for direct mitigation of negative effects,” she commented.

The European Commission proposes capping revenues from the sale of electricity from renewable sources, nuclear power and brown coal, which have the lowest operating costs and electricity prices do not correspond to them. The measure is supposed to generate 140 billion euros for EU countries, which they can direct to customers.

Representatives of member states will discuss the measures at the upcoming Extraordinary Energy Council called for by the Czech presidency at the end of September.

After an agreement with the European Commission and other member states, I have decided that at the end of September in Brussels we will finish what we started last week. Day 30.9. I am calling for another extraordinary meeting of the Council of Energy Ministers. We will discuss the Commission’s proposals to solve the problem of high energy prices.

Von der Leyen also thought about the long-term framework that the EU should take with regard to energy sources. She stressed the need to move to renewable sources, which would help member states wean themselves off their dependence on fossil fuels.

However, at the same time, she stated that she is aware of the possibility of replacing one subordination with another, and therefore she wants to advocate for deepening cooperation with “reliable and relevant” partner countries – Norway, Chile, Mexico or New Zealand. The European Commission will therefore prepare a draft of the so-called Ultra Rare Raw Materials Act. The goal is to build strategic reserves where supply is at risk.

“Together with member states, we will therefore develop a set of measures that take into account the specific nature of our relationships with suppliers – from unreliable suppliers like Russia to trusted friends.”

Besides energy and its acquisition, the chair of the committee also touched on climate change and its manifestations in Europe. The continent experienced the hottest summer in the history of measurements, which was manifested in large-scale fires not only in the south, but also in the Czech Republic, for example.

The Balkan dilemma in the European Union. Either accept the countries there or leave them to Russia and China

In order for the union to function as a well-equipped machine, the commission chairperson wants to focus on efficient use of labor, improving the business environment, and enhancing competitiveness. It wishes to achieve this by removing barriers to small business, which “must be central to the transformation – because it is the backbone of Europe’s long and successful history of the industry”.

For this purpose, a “Be Fit” package of exemptions for small and medium-sized businesses will be introduced, which will include a proposal for a unified set of tax rules for doing business in Europe.

According to von der Leyen, it is necessary to focus on education to ensure an adequate workforce. “That is why I propose that 2023 become the European Year of Vocational Training and, above all, more education,” she said in Strasbourg.

Looking ahead, she also mentioned the legacy of the late Queen Elizabeth II, who she referred to as a legend. “It has been a fulcrum in the tumultuous and transformative events of the past 70 years,” said Lane. Then she compared these operations with the change in ranking as a result of Russian aggression.

This watershed moment in world politics requires us to rethink our foreign policy agenda. It’s time to invest in the power of democracies.”

The President of the European Commission sees the path to a strong democracy in the unity of the Union. According to her, her possible expansion can also contribute to this. “I wish the people of the Western Balkans, Ukraine, Moldova and Georgia would know: you are part of our family, your future is in our union, and our union is incomplete without you,” she emphasized.

On the topic of defending the value of democracy, Lane also turned towards within the European Union. She stressed the European Commission’s commitment to insisting on the independence of the judiciary. The Federation budget will be protected using the conditionality tool. At the same time, she spoke about the modernization of the anti-corruption law.

Negotiations are tough in the European Union. However, Hungary has already found itself on the edge of the abyss, as Minister Beck explains

“If we want to show credibility when we ask candidate countries to strengthen their democracies, we need to eliminate corruption at home as well,” she said. In addition to the more classic crimes – such as bribery – we will tighten the rules for violations of the law such as illicit enrichment, abuse of power and abuse of power. We also propose to include corruption in the European Union’s human rights sanctions regime, which is a new tool to protect our values ​​abroad.”

In conclusion, she repeated the words of former European Parliament President David Sassoli: “Democracy has never gone out of fashion, but it must be modernized so that it can continue to improve people’s lives.”

Von der Leyen noted the starting points that emerged from the recent conference on the future of Europe, where young people from all member states discussed a possible next direction. In this context, the points discussed were sent to the Speaker of the House of Representatives, Mitsula, and to the Prime Minister, Petar Vial (ODS), as representatives of the country holding the Presidency.

In the last minutes of the speech, she again returned to the war in Ukraine and, above all, to the helping hand of the citizens of the Union to the Ukrainian refugees. The Chairperson of the Commission highlighted solidarity as part of the “European spirit”.

“A union that stands together inextricably. A union that wins together. Long live Europe,” von der Leyen ended her speech.