Architect Vlado Milunic, co-author of The Dancing House, has passed away. He was 81 years old 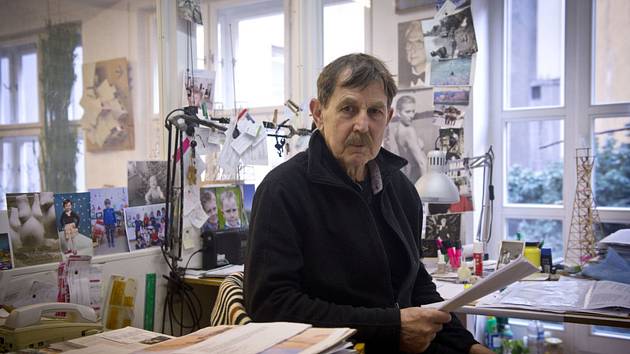 At the age of 81, the Czech-Croatian architect Vlado Milunic, who became known to the public as co-author of the Dancing House in Prague, died after a long illness. Czech radio reported that day with a reference to the architect’s family. A native of Croatia who has lived in the Czech Republic since his youth, he was also known for his views on what housing complexes in Prague would look like and as a co-author of a number of social buildings. He worked as a teacher at the Czech Technical University (ČVUT), where he studied architecture.

According to Radiožurnál, the Czech-Croatian architect Vlado Milunic has died at the age of 81 (pictured on February 25, 2016). His most famous work was The Dancing House in Prague

The Dancing House on the Rašín Bridge in Prague was designed by Miluni with Canadian-American architect Frank Gehry. The building, which was built in the mid-nineties of the last century, aroused many negative reactions at first. It has gradually become one of the symbols of Prague and has received many awards during the quarter century of its existence.

In an interview with ČTK in 2016, Milunic recalled the building’s history and the opportunity to meet with former President Václav Havel, who along with the architect was behind the idea of ​​building a waterfront clearing. As a family of six, the Meloni family couldn’t fit in a bunch of apartments on an apartment estate in the 1980s and was allocated an apartment in the Havel family home on Raschen Bridge. “We got to the empty third floor, which was robbed from them in 1948. We had no furniture and the Havels asked us to take their original furniture. When my parents died, Vaclav asked me if I would divide the apartment for two families,” the architect recalls, “Ivan and for him.” The space next door to the house was in which Havells has been empty since the bombing of 1945. In the early 1990s, Havel and Milunich came up with the idea to rebuild it again. “I wanted the barracks to be a reworking of the Velvet Revolution, in the second plan there is a totalitarian society, from which a smaller part broke away and entered into the The world of changes.

Tourists like Dancing House, but Prague residents don’t go inside

Originally, it was planned to have a house with mainly cultural content, shops or refreshments. However, no investor was found, and, as the architect said, “archaeologists were outraged that I destroyed a row of barracks on the waterfront that is so unique in the world.” But the important thing is that the managers of the Nationale Nederlanden Real Estate, who became an investor, loved the dancing house. “I told them I would overcome the resistance by collaborating with a world star,” Milunic says. Jean Nouvel, who later built the Golden Angel, did not come out, but Frank Gehry did, which Milunich recommended to the directors.

In the seventies and eighties of the last century, the architect, especially in collaboration with the architect Jan Link in Prague, completed several retirement homes in Prague, for example in Bohnice, Maleيسice, Chodov and Haje, or a nunnery in Prusik. But it was not limited to the capital or the Czech Republic. Abroad, he participated, for example, in the creation of the so-called Czech Quarter in Shanghai, China.

Vlado (Vladimir) Milunic was born on March 3, 1941 in Zagreb. Since he was 16, he has lived in Prague, where his parents moved from what was then Yugoslavia. Between 1960 and 1966 he studied architecture at the Czech Technical University, then worked in Paris for three years. Between 1969 and 1990 he worked at the Prague studios Gamma and Delta. Since 1990 he has his own Studio VM (Free Ideas).

#Architect #coauthor #Dancing #House #Milunic #passed #Vlado #years
Previous Post
People in the factory can feel the inferiority, they replace it with pride by hard work, as a sociologist from this field explains
Next Post
Police arrested a smuggler with eight refugees at the Slovak border. He faces up to five years in prison