About three percent of children suffer from amblyopia. It can manifest itself when writing and reading, it must be processed as quickly as possible 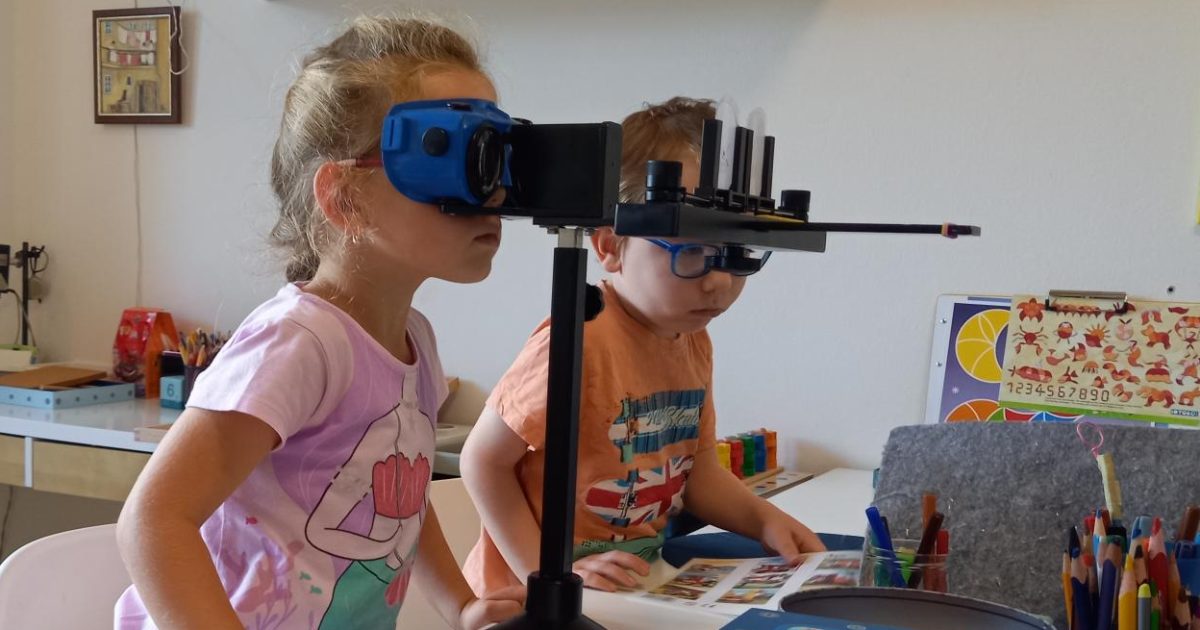 “This device is called a stereotactic, where you look at two separate images with each eye, and in the brain the image must be connected or combined,” explains Martina Hamplova, orthopedist and special educator.

“If a child can’t see with one eye or the other, they only see half of the picture,” he explains.

Treatment of amblyopia in childhood in the hospital

One of the girls in the inpatient unit came running, looking at the stereo. You usually wear an occlusion, which is currently off, to describe what you see in the device.

The orthoptist asks, “If we move the image, does the ghost you see disappear or is it still there?”

The girl replied, “It’s still there.”

“Excellent, here we can see that both eyes are looking at the same time, there has been some improvement in vision,” assesses the orthoptist Hamplova.

“Perhaps the biggest fear for preschoolers is myopia, when a child can see, but often sees with only one eye and the parent doesn’t know it at all,” he adds.

“Late detections usually occur in children who may not have any problems in their family history, so they have no idea that the child might have a problem. “Unfortunately, sometimes it is not detected until the age of seven,” Hamblova describes the difficulties. in the discovery of amblyopia.

Until the third grade

Currently, they have Dr. Očka in Prague caters to preschoolers and younger children, but first and second graders also visit them regularly. He tries to influence amblyopia until the third grade.

“There, the transformation is really difficult and complicated, but we always hope that we can take at least partial steps,” says special educator and optometrist Michaela Podzemkova, who has been working with children at a stationary hospital for a long time.

“Toddlers are ideal, from about four years old, when they are playing sports. If caught in time, they can stick an occlusal device from the age of two, and intense exercise is ideal from about the age of four.”

There are also a lot of first-graders in the clinic who will develop writing and reading difficulties. Subsequent examination reveals that he does not have any identified learning disability and that the culprit, for example, is lack of eye cooperation or some other eye defect.

“We found out by chance during a seven-year visit to the pediatrician, when they tested whether she could see with her right and left eyes, and we discovered that she could not see in one eye,” says the young lady’s mother, Táňa Hrušková.

With the little Lada, we turned to optotype, a classic white square, where there are uppercase and lowercase letters, to test how you see.

“When she was first with us, she could barely see the biggest pictures from half a meter away. Now he’s sitting five meters away and the transformation is really big there. But of course it’s only two months after the amblyopia was diagnosed, so we can’t expect a complete miracle, but there is an improvement big “.

#amblyopia #children #manifest #percent #processed #quickly #reading #suffer #writing
Previous Post
The rest of the week will be warmer, with temperatures set to reach 19 degrees on SundayNow.cz
Next Post
Online: the bombing damaged the wires at the Zaporizhia nuclear power plant, the reactor was operating in an emergency